Last Saturday afforded Club members one of our greatest nights. Watching the absolute demolition of our once mighty arch-rivals Glebe, with our Men’s grades scoring a total of 54 goals to and conceding 10 against – underpinned what was sure to be a wonderful night.  This culminated in the Kookaburra’s claiming GOLD over the Kiwi Black Sticks. It was the end to an awesome campaign for our Lachi Sharp and Tom Craig both having played vital roles not only in the final, but throughout the entire tournament. It was a very excited New Player’s Night crowd who watched on with a strong sense of pride, still buzzing from our 1st Grade Men’s 11 goal victory just moments before. Congratulations Lachi and Tom your GOLD is an inspiration to all Club members and is well deserved. Congratulations also to the numerous Ryde Women’s and Men’s Representative players who participated in the preliminary Commonwealth Games practice matches, as well as to the players who are part of the formal Kookaburra programme including Tim Brand, Ben Craig and Kieron Arthur. For without you – the teams could not rise to such grand heights!

What an amazing introduction to our Club for the new members present. Thank you Lachi and Tom for giving us such a wonderful night and an experience to remember for a lifetime. We know one of you will be back in the black and white this weekend…..But who? Safe travels. 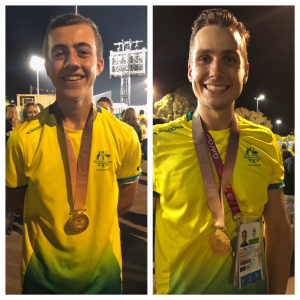 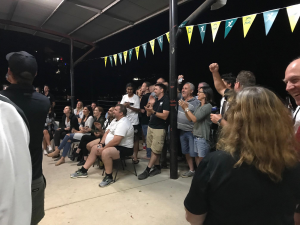